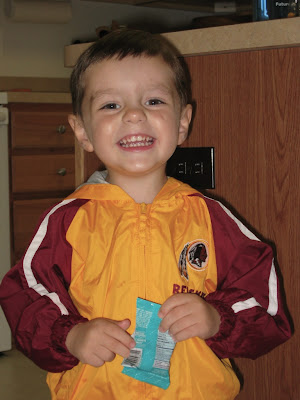 After a fun afternoon with friends and a bar-b-que:
Dave: "Was that a fun time or what?"
Charlie: "What."
(Shelly and Dave snickering)

Looking good after a fresh bath and haircut:
Shelly: "Charlie, do you look awesome or what!?"
Charlie: "What, mom, what."

Shelly was looking out the window during breakfast.
Charlie: "What do you see, mom?"
Shelly: "Oh, I see trees and grass and the such."
Charlie: "Mom, there's no such."

Charlie was looking at large pile of books.
Shelly: "Wow, Charlie, you're going through a lot of books there."
Charlie: "Yes, I'm mam."
(not a typo there.)
Posted by Shelly at 1:44 PM

Just get the kid a hypothesis! I loved that.