Part of growing up

So we've all had this experience:
The huge hill you used to be scared to ride your bike down when you were little, isn't quite as impressive when it is revisited years later. Or the super fun favorite activity of building blanket forts with your brothers on Christmas Eve, somehow isn't so "cool" anymore when you're a teenager. Charlie has, unfortunately, had a similar experience.

Let me back up....a year ago. I was trying to get Charlie to give up the pacifier. We tried everything, a couple of times. We even bought a really cool guitar that one of Charlie's friends had and he wanted really badly. Here is said guitar: 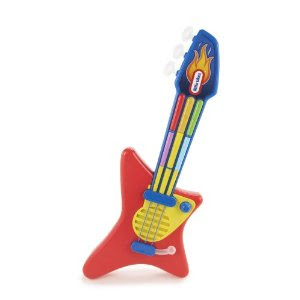 But he couldn't have both. If he wanted the guitar he had to give up the pacifier. In the end, after he couldn't get to sleep and was regressing in the potty training, I gave up. My mother and a friend gave me the advice that, "no boy ever goes off to scout camp with a pacifier." It was ultimately peer pressure and a fear of buck teeth that was making me so anxious about him still using it. So we put the restriction that it was to stay in the bed. And the guitar went up in the closet.

Meanwhile, he turned 3 then 3 1/2 and is still using the pacifier. Mom's not worried. But we would gently remind him that as soon as this pacifier "died" there wouldn't be another one. "What?!!" you say, "this kid is STILL using a pacifier?" Don't try to peer-pressure me into anything here. I was letting him do it on is own time.

Recently, a friend of Dave's lent us his PlayStation along with the full set of Rock Band and Guitar Hero equipment, which we have been playing quite a bit. We're talking the real stuff, here man:

Then, all of the sudden, last night during dinner, Charlie announced that he is done with his pacifier. I could read the look in his eyes. He wanted that coveted guitar back. We made a new deal that he needed to go to bed, stay in bed and sleep without the pacifier and the next morning he would get the guitar. This morning he came into my room just 'a beaming from ear to ear. He couldn't even wait to get dressed to get downstairs and have me climb up on a chair and get it out of the closet. I dusted it off and handed it to him. But, wait, there was a hesitation...a look of disappointment swept across his face.

"No, mom! Not that guitar. That one is....too small! That's not the right one!" Something had gone terribly wrong. Tears began to well up. Could it be possible that mom actually shrunk this guitar??

I tried my best to explain that this is the same exact guitar he had before and HE was the one that grew bigger. Yet, he refused to touch it and was convinced that it used to be bigger. After moping and sulking for a good portion of the morning, I finally got him to eat some cereal and diverted his attention. Maybe half way through the day, after many demonstrations of just how "cool" this guitar really is (mom basically making a fool of herself), Charlie decides that maybe it is the same guitar and is worthy of his playtime.

At lunch time he said to me, "Mom, that guitar isn't as cool as those other guitars." Well, maybe that is true but I did catch him "rocking out" with it. 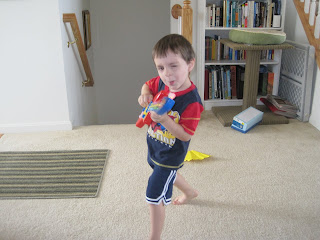 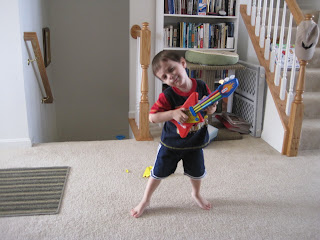 Yay! So glad he decided to give it a try! That is so cute that he thought it was too small. And so glad you didn't succomb to peer pressure. We moms fall into that way too much!

oh my gosh!! i was laughing hysterically through this whole blog! SO CUTE!! and that last picture... is david myers to a tea
ha ha! such a cute family :)
~mo and chase

Small guitar or not, Charlie is totally rockin' it. Cute post! But I beg to differ Shelly...I STILL think blanket forts are awesome. :)

I don't think it's coincidental that Charlie has taken up the guitar on the very day of Paul McArtney's SLC concert. No indeed, I don't. Did you know that Travis and Theron went??? I'm soooooo jealous.

cute! :) I just think kids are different and ready for things at certain times. You know how I always put Abby to sleep... well now... at 22 months, she ASKS to go in her crib with NO TEARS! She was just ready! :)

how cute!! I still nurse Kendall to sleep. My big fear is she will be 4 and still wanting to nurse to sleep. Hopefully, she will just give it up on her own everntually.

and I also agree that blanket forts are some of the best things, ever!

Love your method. I used that same method for Sydney when she was little. Love them making their own choices!!