Last night Dave took me to the land of fog machines, guys with long fluffy hair, wearing black skinny pants playing wammies on their custom-made electric guitars. Yep, you guessed it, we went to a classic rock concert. STYX & 38 Special. "STYX??" you say, "Aren't they like from the 70's?" Yep.

First of all, one thing that Dave and I will tell you that is important in our relationship is that we don't fight over what to listen to on the radio. We are pretty much in agreement of that most of the time. For instance, when we go on vacation and rent a car and need to set the radio stations, we'll scan through and always find the Classic Rock stations first. Sometimes, however, Dave's taste leans a little more towards "rock" and mine leans more towards the "classic". But anyway, we were both excited for this concert.

We arrived on time, found a primo parking spot and bypassed the 21 I.D. check point because we wouldn't be drinking beer. Before long, after we got some barbecue and bottled water, I started to realize that we just might be the youngest people there. We found our seats, put our ear plugs in and looking around...um, yep, we were the ONLY people wearing ear plugs. Yet, more evidence that I don't get out much. People even pointed! I thought it was pretty funny, because anyone could tell you that the decibel at which the speakers are playing is enough to make you deaf in one evening! Maybe I was little out of my element. 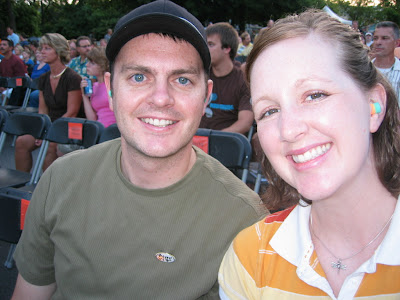 During one of the breaks, Dave and I wandered over to the T-shirt booth and found a $6 "STYX" pin. Sure, why not? We needed a souviner. Turns out it was one of those magnet pins that light up! We wondered why not more people were wearing them. 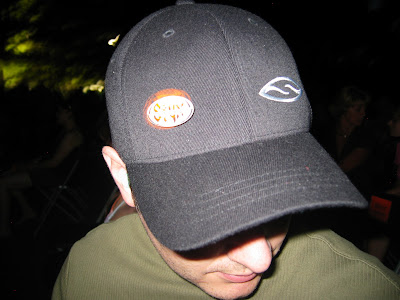 Yes, the concert was good and they played a few songs with which I could sing along. But the most entertaining part of the evening was the lady sitting next to us. Probably in her late 40's, maybe 50's, she was obviously accustomed to coming to lots of concerts. She was under 5 feet tall, had red, curly hair down past her bottom, wore a tye-dyed spaghetti strap tank top and stonewashed jeans. Her straight-out-of-the-80's-outfit was complete with a pair of wedge sandals to bring her just up to 5 feet tall. All by herself but she was TOTALLY into the music. I talked to her for a bit and she let me know that she was used to a lot heavier rock than this. And I'm thinking, "Any more heavy than this and I would be TOTALLY out of my element!" As the evening progressed, she moved out the aisle so she could see better AND have room for the full hair flip moves. She needed lots of clearance. I snuck a little clip of her just to show you what she was like calm and tame before the show really got started. Unfortunately, it was too dark to get her in full action. You can also see a little bit of Dave's moves. Thanks for the great date night, Davey.

Did they play that one song from Billy Madison?

Remind me again which one that is, Tom?

You sound like me. Sometimes people watching is the funnest part about an event. Looks like fun.

I wanted to go to that too... Oh well. Maybe next time. Then you won't be the only young ones there. Adam likes classic rock as well, maybe a little heavier than you... He really digs led zepplin.

I love the clip of the girl. I love concerts! When I was a kid I went to a New Kids on The Block concert, our seats were about 7 rows back and right by some of the huge speakers. My mom and my aunt both put ear plugs in and I was so embarrassed by their behavior. I though I would never be like that when I was an adult. Sure enough now, I have to put ear plugs in because after awhile (and depending on where the seats are) I get a bad headache. I would have been right there with you ear plugs and all. Guess I shouldn't have thought my mom was so lame!!! Classic rock is the best!